Bugger off from finding my blog with your stupid search terms. You are looking in the wrong place. I am a Ginger Lover and proud (Literally as LordCurd is the most handsome Ginger Man ever- he looks like a Ginger James McAvoy , I love him a heck of a lot and if I was a Mills &Booner I would describe myself as his Lover (more interesting than Wife innit)).

I am also a Ginger Gene Carrier and very proud of my ability to produce Beautiful Ginger and Strawberry Blonde Babies so far…. So please don’t happen upon my blog by searching “I hate ginger babies”, because all that will invoke is my bile and vitriol towards you along with some telepathic painful incurable infectious itchy curdy discharge thoughts.

Effectively Gingerism is an “acceptable” form of racism- and it is just not on. Makes me furious, and if anyone dares be mean to my beautiful Ginger Baby– beware the Wrath of the Curd descending on your backside with incredible force.

Shall rant off with Tim Minchin singing about Prejudice.

P.S Anyone else notice that apple autocorrect will capitalise White, Black and Ginger but no other colour. Interesting.

I always wanted a Ginger baby, being married to a beautiful Ginger man, I felt it was my duty to continue the Ginger legacy, especially when we thought Gingers were dying out (even if it turned out to be a hoax). I have always known I was a Ginger gene carrier- all my mum can remember about her grandma was her fiery red hair and in some lights my brunette hair will take on a reddish tinge confirming the latent presence of the gene. However apparently ginger hair often skips a generation so being married to one so Ginger as LordCurd was no guarantee in producing a suitably ginger offspring.

But I had high hopes for my abilities to produce ginger babies. Sadly my first daughter Oddler is a blonde, possibly strawberry blonde but blonde nonetheless. She was born with lots of jet black hair which she then lost to be completely bald for months so we were optimistic, until it grew back blonde. Have to admit being a smidge disappointed she turned out not to be a Ginger, (although obviously she is absolutely gorgeous in her own right and I have hopes her hair will turn more “strawberry” as she gets older). I think the rest of the family were disappointed too. In our family the first question isn’t “what weight” or “how was the birth” but “is she Ginger?”

Thankfully second time around my little Omble is as Ginger as her daddy. She’s pretty bald at the minute so it’s just a fine dusting of fine silky Ginger fluff atop her head, but it’s beautiful and I am so proud of it. She also has a Ginger monobrow thing going on which is a little bizarre but very cute.

There have been ponderances that my being able to produce a Ginger Baby was in actual fact nothing to do with genetics and rather more to do with my total addiction to Jamaican Ginger Cake and gingerbiscuits and all things ginger. After all I did eat rather a lot when pregnant and the more cake I eat as breastfeeding, the “gingeryer” she seems to get. Aftert all if eating too many carrots can turn your skin orange then why shouldn’t eating too much ginger stuff turn your kid’s hair Ginger, as she recieves all the gingery compounds via the placenta and then breastmilk?

The benefits to having a ginger baby are numerous- firstly people know not to buy you pink, which is a colour I hate but all little girls seem to get given masses of it. Secondly Gingers are incredibly easy to spot in a crowd- thus when I invariably lose her or LordCurd in a crowd- I will spot them again very quickly. Invaluable! Thirdly they are simply glorious and gorgeous and a wonder to behold.

However sadly there are downsides too- people can be unbelievable cruel and nasty about Gingers in a way that if they were about a skin colour they would be arrested. Gingerism has become the only acceptable form of racism. I know Lord Curd had to put up with a lot of stick growing up and I worry that my beautiful fiery red Omble will have to do the same. And seriously WHAT IS WITH THE OBSESSION WITH GINGER PUBES!?! I will spit motherfurious bullets at anyone who makes my amazing redhead feel bad for her beautiful hair or in fact anyone who makes my girls feel bad about their appearance or in fact anything.

So anyhow my awesome Ginger Baby- you are beautiful and rare and shall always be cherished.

As a breastfeeder, cake is my friend, I am constantly starving hungry in a way that only huge amounts of sugary stodge can fix. In the absence of a wonderful Cake Fairy doing a delivery, then you, my dear darling Jamaican Ginger Cake, are my favourite.  I generally need to eat one whole one of you A DAY!  Such greed I hear you cry- but I will have you know that the Jamaican Ginger Cake& Breastfeeding diet is one of the best there is.  I am now below my pre-pregnancy weight and still losing

Anyhow let me share how easy it is to devour you in a day, this sequence of pictures were taken last Wednesday prior to the Cake Fairy‘s wonderful and unexpected delivery on Friday.  (I would have posted the sequence of devouring that enormous cake of wonder, but frankly I was too busy stuffing it into my face 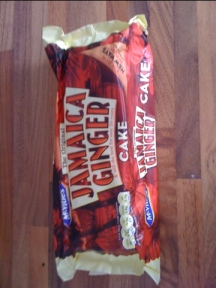 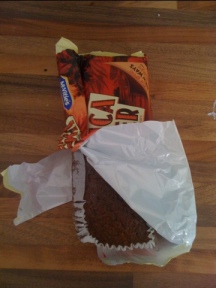 Peeling back your scrumptious layers

Cheeky gnaw on you while waiting for the kettle to boil

Second "slice" at 11.30 as I was just passing the kitchen 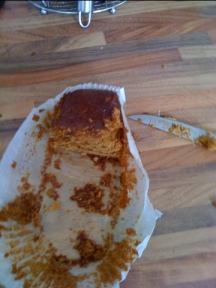 2.45 Another one on way back from the loo

2.45 Ah sod it- seems silly to leave such a tiny piece

2.46 scraping the paper clean with my fingernails frantically getting every last crumb

And that is how a breastfeeder eats a Jamaican Ginger Cake.

Posted in Things I Love 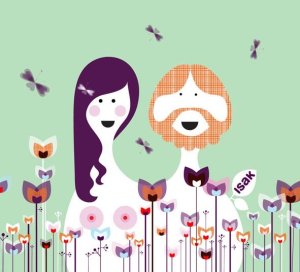 P.S Isak- Please start redoing the beautiful tray with the above image on- ours got lost in a move and I want it back!

Posted in Things I Love, Uncategorized